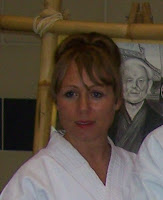 JANUARY STUDENT OF THE MONTH -- CANDIS DURAND.
The student of the month for January was Candis Durand. Candis is one of our most dedicated black belts. She participates in numerous karate events throughout the year including this past National Tournament in Phoenix, AZ. Candis is very enthusiastic about karate. She is training very hard with her focus on testing for Nidan in 2008. She has an outgoing personality which has made her many friends throughout the Southern Region. She is a leader in the dojo and helps to keep the school spirit high.
FEBRUARY STUDENT OF THE MONTH -- CODY SEDLITSKY. 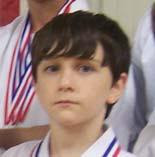 The student of the month for February is Cody Sedlitsky. Cody is our youngest black belts. He participates in many karate events throughout the year. His positive attitude, attention to detail and great focus will take him far in karate. Cody is an excellence role model for other young students. Congratulations, Cody, on your karate accomplishments and good luck on your future karate achievements. As recipients of these awards, both are now eligible for the Student of the Year Award given every December. Keep up the hard work and keep the school spirit high.
2008 Greenville KARATE camp
The annual Greenville Karate Camp is scheduled for February 28th, March 1st and 2nd. Students are encouraged to participate in the camps given throughout the year. It’s a way to get extra karate training. Also, it’s a lot of fun meeting new people and spending time with old friends. Keep an eye out for the brochures near the office. We usually stay at the Best Western Regency Inn (662-334-6900). Make sure you mention the karate camp when reserving for special room rates.
Posted by ALL SOUTH KARATE FEDERATION at 1:00 PM