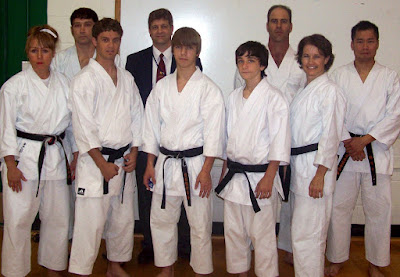 The U.S. team trials were then held between tournament winners and Mr. Mori's competitor's from the SKDI. Having not competed in the tournament, the SKDI competitors were definitely in an advantageous position in the team trial competition. In addition to that, they were very strong at Karate. From the JKAAF organization, Candis, Ray, and Rachel competed on the women's side. Devin, Tony Nakamura, Lane, Dimitri and Soon competed on the men's side. Everyone did kata and fought very well and with great spirit. In the end, from our organization, Ray, Devin, Tony and Lane were named to the United States team that will be competing in Tokyo in 2009 for the world championships. Congratulations to everyone on a very successful tournament.

Posted by ALL SOUTH KARATE FEDERATION at 9:42 AM