It was 13 years ago at Master Camp training a kata class that was being taught by Sensei Yaguchi. Sensei Yaguchi is a great technician and excellent at teaching kata. I think the kata we were practicing was Chinte. I was positioned in a straight row near the middle of the class. Class started and everyone lined up and we began the kata after stretching a little. 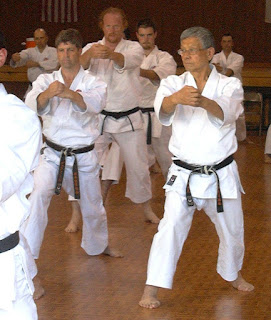 When I did a big turn near the beginning of the kata, I suddenly noticed that Sensei Okazaki was right next to me doing the kata along with me and the class, in fact in line next to me. He didn't say a thing (except to kiai) and just vigorously performed the kata along with us. Of course his technique was flawless and crisp and he appeared quicker and stronger than everyone.

However, what was so unusual to me was that I had never seen Sensei Okazaki training at all before (I had seen him teaching many times), much less right next to me. I knew that he had to train sometimes in order to maintain his outstanding physical karate conditioning, but I had never seen it, except when he demonstrated while teaching. Then suddenly here he was, right next to me, training along with the class. It was easy to see from his expression that he was thoroughly enjoying the training. 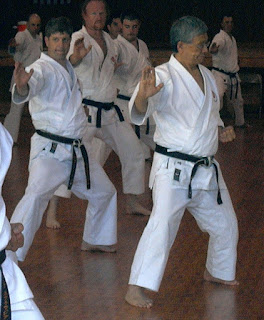 I could also tell from the expressions of the people around me that they probably had never seen it either. Everyone suddenly perked up and did their best technique to attempt to imitate and perhaps impress the great Master. He did several katas with us, smiled broadly, bowed, and quietly left the dojo shortly before class ended.

Class continued and soon I noticed that there was a student near the back with a camera that was taking pictures. Although I had never met him before I tried to keep site of where he was off to as we bowed out. After finishing the class, I ran up the hill barefoot to try and catch him to ask if he had taken pictures of Sensei Okazaki performing the katas. He chuckled and said yes and seemed to know exactly what I was thinking. He told me that he would gladly send them to me if I would give him my e mail address at supper. So at supper I found him and gave him a card from the dojo and asked him to please send me those pictures. He sent me these three pictures the next week. It was a moment I appreciate being able to always remember. 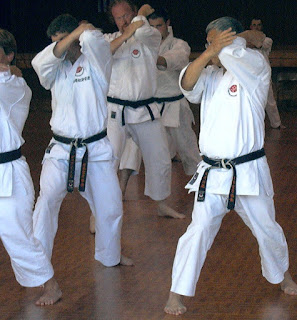 Posted by ALL SOUTH KARATE FEDERATION at 3:10 PM